Can AnyTrack track conversions from iOS14 opted out users? Yes

True, AnyTrack does it, and it's 100% compliant, legal, and in line with privacy policies, tracking restrictions, and other regulations.

When it comes to iOS 14 devices, the new privacy requirements are part of the App Tracking Transparency framework that Apple introduced in 2021.

You must use the AppTrackingTransparency framework if your app collects data about end users and shares it with other companies for purposes of tracking across apps and websites. The AppTrackingTransparency framework presents an app-tracking authorization request to the user and provides the tracking authorization status. Learn more on Apple Developer website

Who is bound to the App Tracking Transparency framework?

App developers such as Facebook, Google, Twitter, Snapchat, TikTok, Tinder and any other app you can find on the app store.

Is AnyTrack an app you can find on the Apple App Store?

No. Since AnyTrack tracks conversions coming from shops, CRMs, affiliate networks, it is not affected by what happens on the apps.

So what is the fuss about the iOS 14 Tracking??

In a nutshell, when you buy ads on Facebook, your ads will appear on the Facebook Apps, or other apps that use the Facebook SDK to monetize their apps.

Since over 95% of users don't give consent, Facebook is not allowed to pass identifiable data to your shop when the user clicks on your ads.

So what's the difference if the data is shared between the advertiser and Facebook?

Except that it's not that simple

The Facebook Pixel & Conversion API rely on each others to collect, process, and sync data that can be triggered either on the browser, or the server or both and at the same time.

It's a meticulous process, that is data intensive and that comes with many rules such as data hashing, and that requires precise orchestration and pipelining.

There are many tools out there that help marketers implement the Facebook Conversion API, including Google Tag Manager, Segment, or Zapier.

Yet, each of these integration tools come with technical challenges that require coding skills that most marketers don't have.

How is AnyTrack different than these tools?

These tools are built to perform tasks that you tell them to do. They are only as good as you understand them, and program (read code) them to do.

In most cases only skilled developers can implement them.

✅ On the other hand, the AnyTrack platform seamlessly aligns with the Facebook Marketing Platform automatically orchestrates your data collection, processing and streaming across your website, shops, crm, api and the Facebook Conversion API.

Do I need technical skills to connect AnyTrack with the Facebook Conversion API?

No. The only code you'll ever see, is the Facebook Pixel (that you've probably already implemented on your website.)

What else AnyTrack does regarding the iOS14 tracking limitations?

Tracking - AnyTrack tracks 100% of your conversions in real time

Data warehouse - Anytrack lets you send real time data to any data warehouse for ad hoc reporting or if you need to build your own reporting dashboards.

Inspect every single conversion timeline so you can see exactly what leads to a purchase or what brings back your customers. 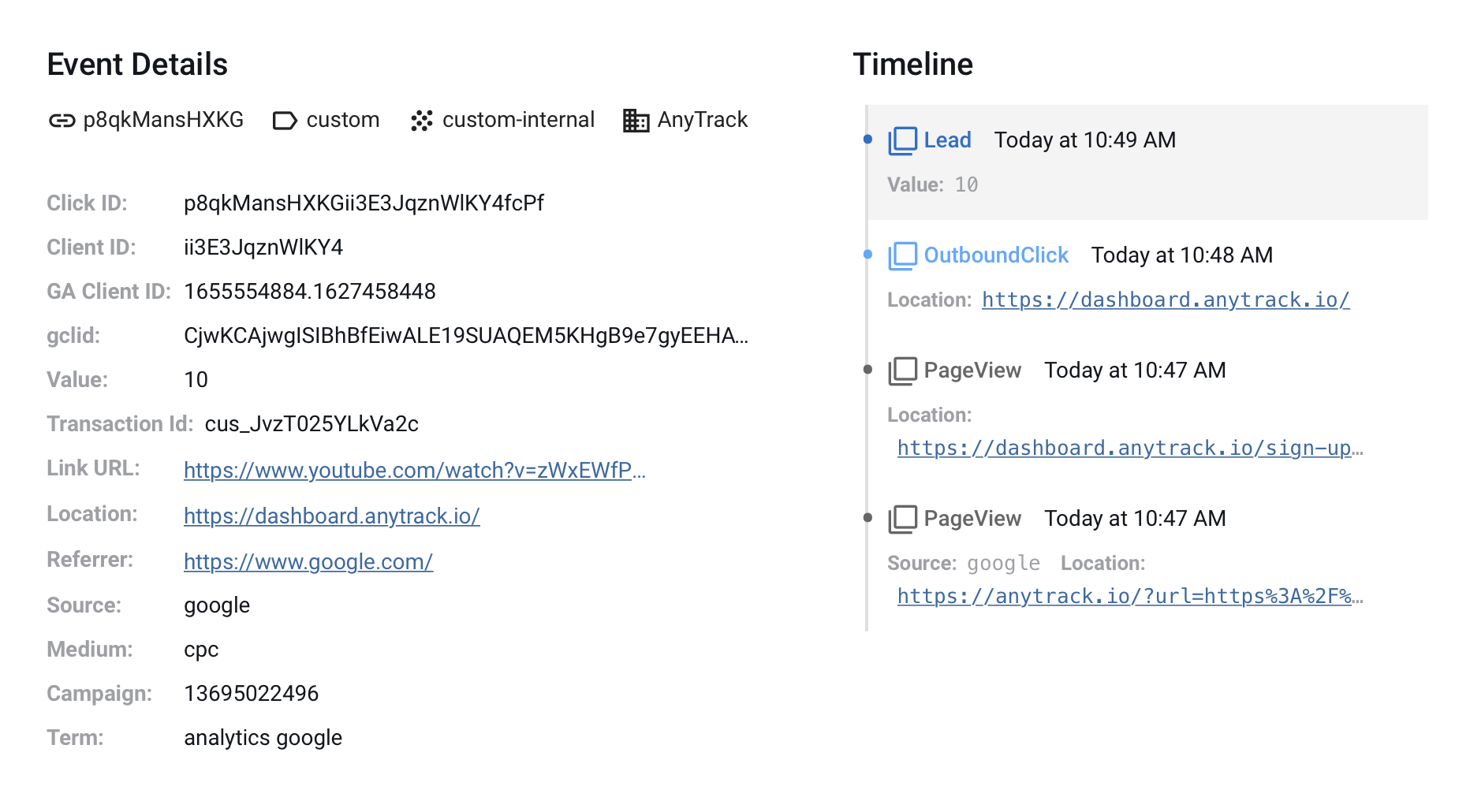 AnyTrack lets you integrate with Google Analytics so you get an additional reporting layer, and the ability to create custom audiences for your Google Ads campaigns. 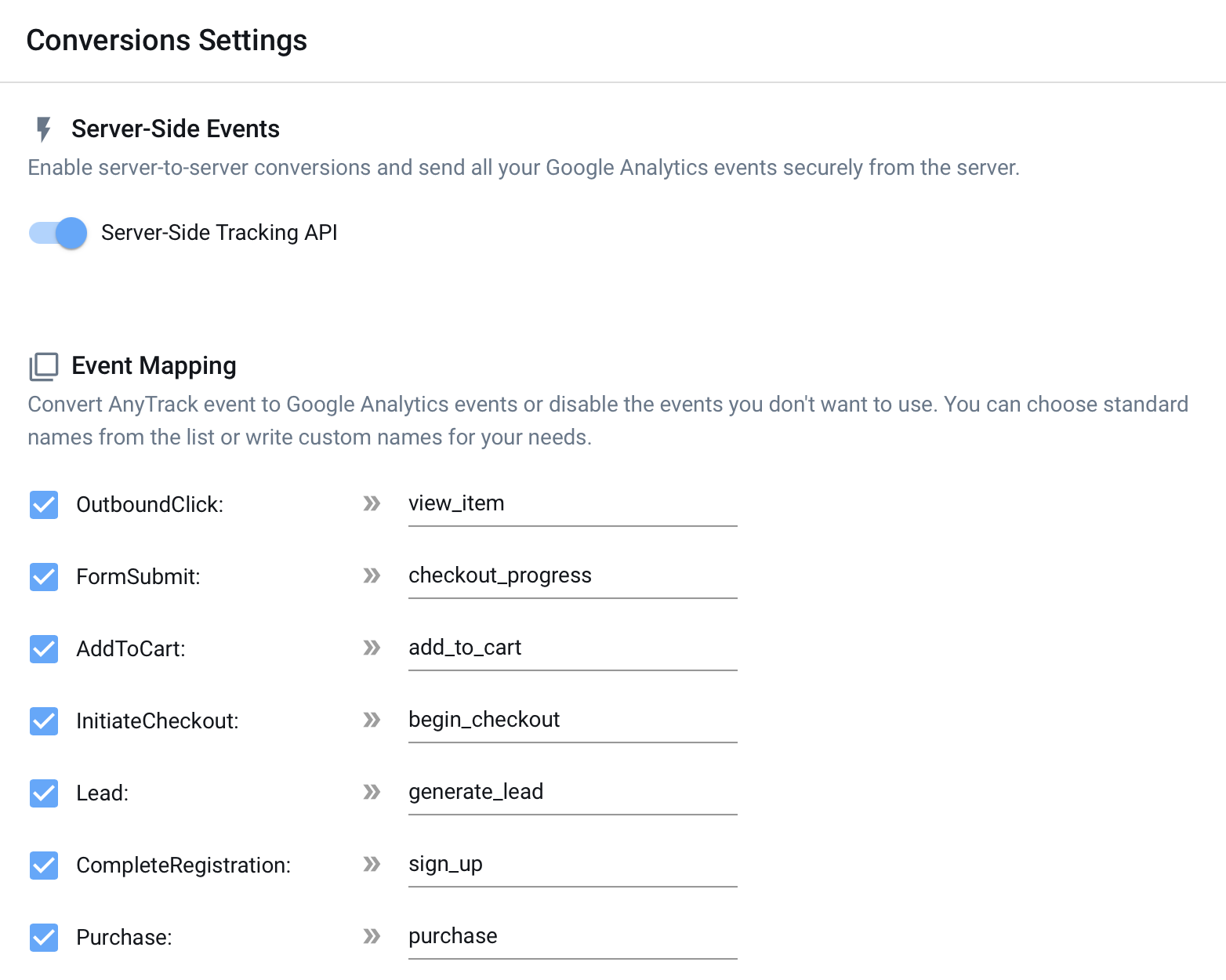